A year of risk and reward

Sian Sinclair on the outlook for real estate & construction

The global economy has entered another period of uncertainty, with the Greek elections threatening to reignite the eurozone crisis and the dramatic fall in the oil price spooking markets. However, key fundamentals such as strong growth forecasts in major markets such as India, the UK and US, a rising and more mobile world population, combined with rapid urbanisation suggest the long-term outlook for the real estate & construction sector in 2015 is positive.

Business leaders in the sector remain buoyant according to our International Business Report, a quarterly global confidence barometer. Expectations for increased revenues have averaged 51% over the past 12 months, up from 48% in 2013 and 38% in 2012. Accordingly, hiring and investment plans have also ticked upwards. The proportion of businesses citing a shortage of orders fell again, down to 34%, from 35% and 40% in 2013 and 2012 respectively. The financial crisis hit the sector disproportionately hard and consequently, the recovery has taken some time. Our indicators are showing that businesses have had a renewed vigour over the past 24 months. 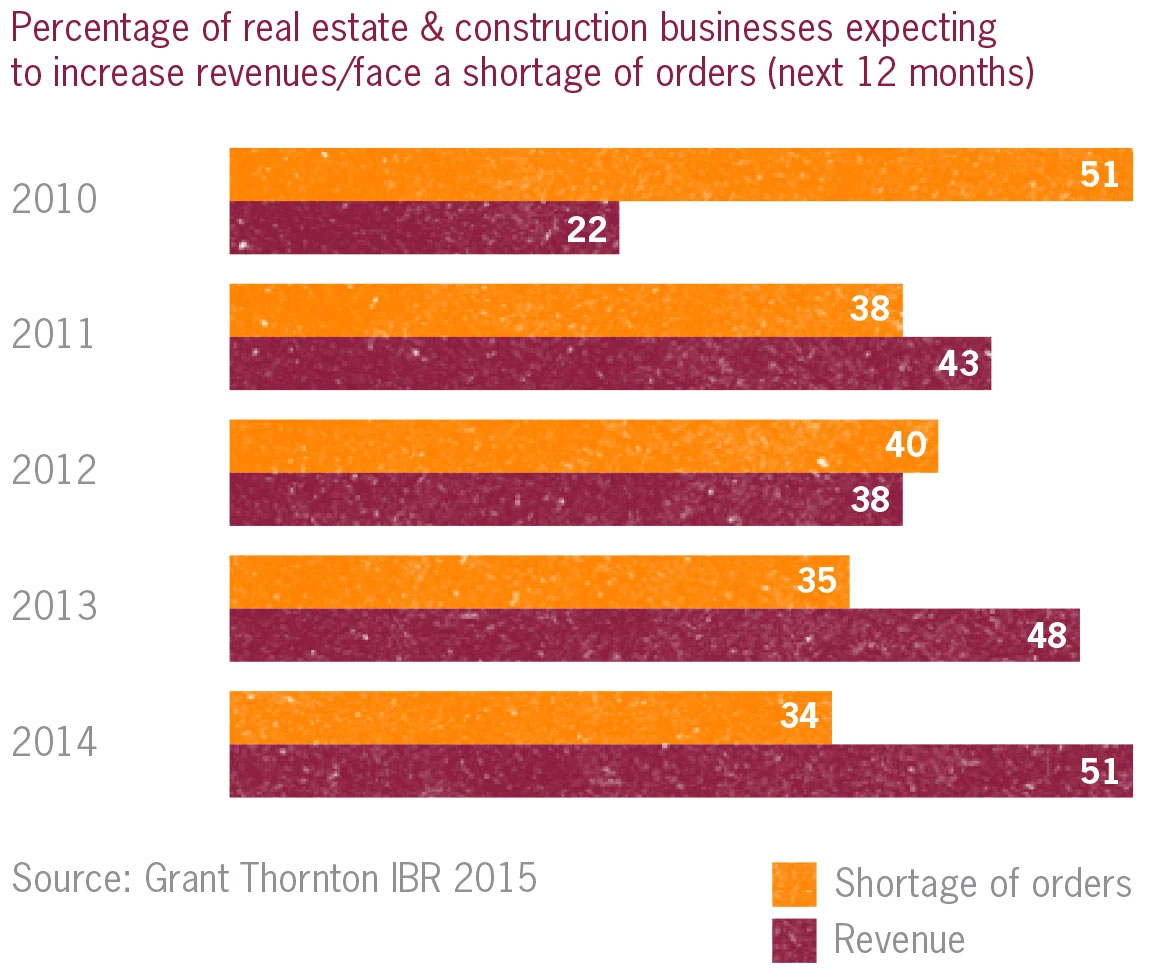 While real estate & construction businesses are not expecting to see their prices decline (net 25% of the sector plan to increase selling prices in 2015, which is marginally above the all-sector average), their profitability expectations have gone backwards in the past 12 months – down to 36%, from 41% in 2013 and the lowest since 2010. This squeeze may be driven by slowing house prices in major markets such as the eurozone (up only 0.5% year-on-year in 2014) and the US (4.3% - the slowest in two years); while China actually saw a decline of 3.6%. Of course, some markets have performed much better: UK and Ireland have seen double-digit increases (on the back of sharp downturns).

A highly leveraged sector means demand will be sensitive to monetary policy, however low inflation across much of the globe (driven in part by declining oil prices) means there is no upward pressure on interest rates in the key markets of China, Europe, the UK and US, indicating mortgage rates will stay lower for longer. The cloud on the horizon being if any of these markets slip into deflation (inflation in the eurozone stands at 0.6% excluding energy), then the long term real value of debt will rise, increasing repayment pressures on homeowners and developers.

Adding political uncertainty, weakness in the eurozone and Japanese markets into the mix and it is clear that the sector will face a number of challenges in 2015. The good news is that capital inflows into prime residential and commercial property (from Russia into Europe, and from China into Asia Pacific and elsewhere), are expected to remain strong. This will create pockets of opportunity in major cities around the world, particularly established cities such as New York, Paris and Hong Kong where urban renewal is generating desirable investment opportunities. Dynamic businesses should be looking at how to tap into these opportunities. It seems the risk-reward trade-off from property investment could reach new heights in 2015.