The past 12 months have seen women take the lead in some of the toughest economic and political environments, and they also head governments in countries such as Argentina, Australia, Brazil and Thailand.

However, the International Business Report 2012 survey shows that just 21% of senior management roles are held by women globally, a figure which has barely moved over the past decade. Moreover, just 9% of businesses have a female CEO. This short report explores why this issue matters, the current state of play and what is being done about it.

The data from emerging markets is a particular concern. Traditionally, these economies have employed a high percentage of women in top jobs. However, women in Latin America now hold just 22% of senior roles, down from 28% in 2009. In Asia Pacific, this figure dropped from 25% to 19% during this period.

Other key findings from the report 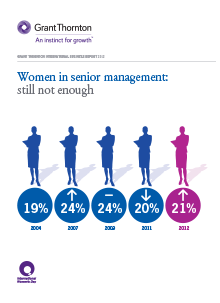