The outlook for business growth

2014 was the year in which the global economic recovery took hold according to our International Business Report, not just in in the UK and US, but in some of the European economies hit hardest by the sovereign debt crisis: Ireland, Spain and even Greece showed nascent signs of recovery. However, recent economic, political and social turmoil is weighing heavily on business leaders’ minds as we enter 2015 with confidence slipping, reflecting well-founded concerns about the unevenness of the global recovery.

Drawing on more than 10,000 interviews with business leaders and international economic forecast data, this report explores the growth drivers and constraints facing dynamic businesses over the next 12 months, including the oil price drop, eurozone crisis and inflation. 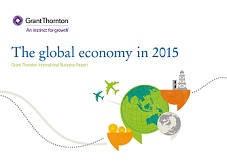